We're trying out something new!  Today, we're inviting you into our kitchen.  I mean, really, with a name like "Wolfe Stew" it was only a matter of time before we did.  And we’re excited to have you here!  So, come on in, pour yourself a beverage, and feel free to either sit back and relax, or jump up and join in.

For our first food blog, we’re bringing out an old favorite – Beef Stroganoff.  As it’s a throwback to childhood for both of us, it’s also a comfort food.  While it’s not our mother’s stroganoff, we do serve it the same way: on top of egg noodles with a side of green beans.

If you follow us on social media, you’ve likely already seen this picture: 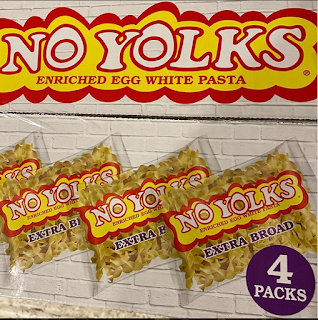 There’s actually a story behind it, which much to your delight, you get to hear now.  Prior to the Mr. posting this, I had posted the following pic: 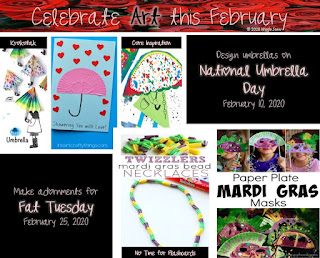 Call it an experiment, the Mr. wanted to know which one would engage our audience more: food (and more specifically a box of well-known but simple, factory-created food) or education (and more specifically a brand-new but complex, self-created resource).  Which do you think won?  Actually, it was a tie.  But regardless, these results intrigued us and pushed us into this space: sharing Our Kitchen on Wolfe Stew.

People seem drawn to food.  It’s a commonality we all share - we must eat.  But it’s more than that: food impacts us emotionally, socially and physically.  Stroganoff, thus, seems a logical place to start, being the motivating factor behind starting the food talk at Wolfe Stew.

If stroganoff is a common menu item in your household too, I’d wager a bet you make it differently than we do, and we’d love to hear your take on it.  Indeed, the egg noodle picture alone elicited an unsolicited stroganoff recipe from one of our Facebook friends.

Our stroganoff recipe comes from a book fair book (teacher life) that currently resides in a box in our garage.  Yet the recipe lives on!  I sometimes wonder if our recipe would indeed be the same as the one in the book, should I ever happen upon it again.  But who knows if that day will ever come.  So, for now, call ours an inspired recipe.  And should I ever once again find the book, I'll update you on how much our recipe varies from the original.

This recipe is a crockpot recipe, which I love.  I love dumping in all the ingredients, setting it to low and letting the magic happen, leaving me to work on other things.  And, when both of us worked outside of the home, we would come home to dinner done.  What a wonderful welcoming!  To make dinner preparations even easier on me, I sometimes prep the crockpot the night before.  Then, all I have to do on a busy morning is place the ceramic pot in the base, plug it in, set it to low, and go.  Easy-peasy, no-fuss morning meet a well-planned, homemade dinner.

Here’s how you do it (Pardon my imprecise measurements.  If it drives you crazy, I’m truly sorry.  It’s just not the way I cook.):

In a crockpot, distribute half of a thinly sliced London broil.  Add a container of mushrooms and an entire, finely sliced, onion (more or less of each depending on the unique tastes of your family).  Across the top, sprinkle a packet of onion soup mix and empty a can of cream of mushroom soup.  Let the crockpot work its magic for eight hours on low power. 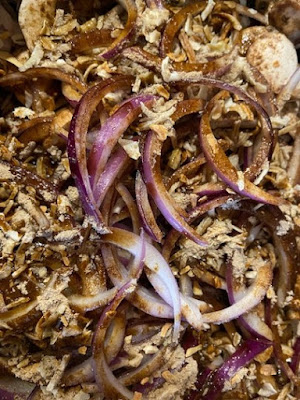 Right before serving, stir in a cup of sour cream and parsley (more if fresh, less if dried) to taste.  Serve on a bed of egg noodles with a side of green beans. 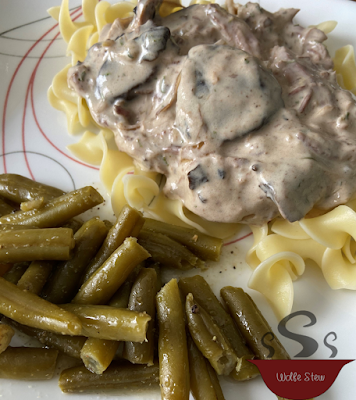 If you’re chomping at the bit to share your secret tips, ingredients, alternate cooking methods or sides, you’re free to jump on down to the comment section below and do that now.  We honestly cannot wait to hear the variety you have to offer.

Next, we’d like to delve into the history of stroganoff.  Stroganoff originated in Russia around the mid-nineteenth century from a family of its own name.  Purportedly, the Count Grigory Stroganov suffered from bad teeth.  To ease the process of eating, his French chef (a symbol of Russian nobility of the time), chopped the beef into small cubes, dredged it in flour, and cooked it in a cream sauce to help it go down more easily (Eremeeva; “Beef Stroganoff”).

Stroganoff’s cookbook debut appeared in A Gift to Young Housewives by Elena Molokhovet, according to Wikipedia.  Molokhovet’s cookbook was the most successful cookbook of its time, continuously revised from 1861-1904.  Truly a treasure trove of information, with recipes ranging from suckling pig to vodka and tips ranging from cooking techniques to servant relations, this book was a definitive household resource.  While once considered outdated, current versions emerged in 1992 and 2003.

Check out the similarities and differences between stroganoff then and now. 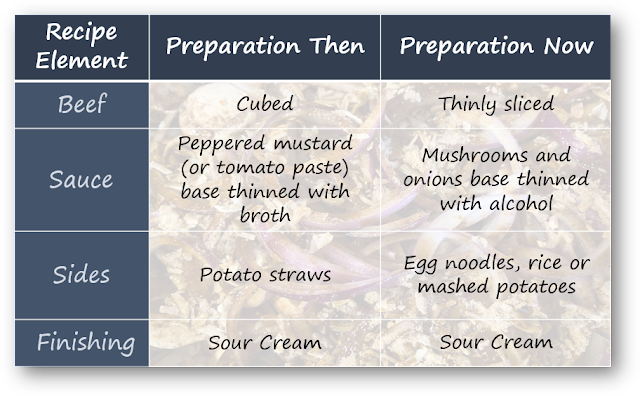 Stroganoff made its way to the United States during the time of World War II.  At that time, Russian and Chinese immigrants started serving it in restaurants.  It was a hit and became a popular dish in the 1950’s and remains popular in some American homes today.

We’d love for you to weigh in: Is stroganoff popular in your home?  How does your version differ?  What are your thoughts on the origin and evolution of stroganoff?

With Love from Our Kitchen,

Did this post leave you hungry for more?  If so, you'll want to check out "Our Kitchen."  That's the room at Wolfe Stew where we serve ideas from Our Kitchen and ask you to share ideas from yours. 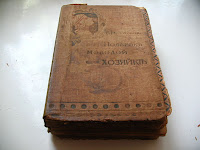 A gift to young housewives 1912 Edition, By IgorMagic - Own work, Public Domain, https://commons.wikimedia.org/w/index.php?curid=7321597