We're glad you've found us!  We have for you today Chapter 6 of Mission Born: Space Twins.  If you're new to the story, or have some catching up to do, follow the link to the desired chapter here:

If you're all caught up and ready to continue, read on.

Once again, we're so glad you came and hope you enjoy the story!  We welcome any feedback you desire to share.  Consider posting a comment, finding us through social media, or shooting us an email (mr@wolfestew.com).

And now, the moment for which you've been waiting, the official, exclusive release of Chapter 6: 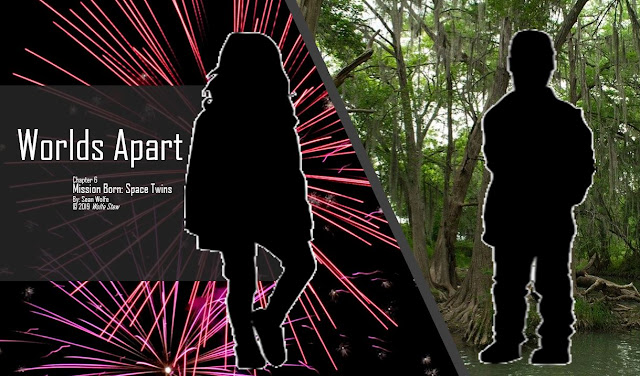 Jess strode quickly to the command deck.  As the entry door slid open, she could see the fleet out the viewport.  The warships were aligning.  They would make a translight jump soon, and the chase would be on!  She wanted her brother back.  Those orcs would pay for everything they had done, especially abducting Wally!  The captain motioned her over to his command chair.  As she approached, Captain Argent moved his hand in a ‘quiet down’ motion, and then whispered to her, “Jess, you need to get a fast shuttle ready.  We have problems….”
Her eyebrows shot up in alarm.  “What do ya mean Cap’n?” She enunciated her words low and slow.
“The Admiral is planning a full bombardment of the orc planet once we’ve pinpointed their main base.  Nothing is going to live through it.  It will take a bit, but we will find it, and then your brother is in trouble.  The fastest shuttle we have is a prototype ether-energized shuttle.  We were going to use it for recon.  In and out missions.  This looks like your best bet to get your brother, but…you won’t be able to come back.”
“Why won’ we be able ta’ return?”
“You will have to steal the ship, Jess.  After that, I will have to make it seem like you were the traitor that worked the software into the system, since I would like to continue captaining this ship.”
He looked her squarely in the eyes, “I’m sorry Jess, but this is the best I can do for you.”
Sighing, Jess nodded weakly, “You’re right….When d’ya wan’ me to take the ship?  I mean it can’t be ‘til we get to th’ orc planet right?”
“Jessica, make preparations now, we hit orc space in about one hour.  If I don’t see you again, keep each other safe.  May God be with you….”  He straightened up in his seat and returned his voice to full level.  “Lieutenant, please check on the Landing Bay, and make sure all systems have been repaired.  We might need the crafts that are left in the upcoming fight.”
“Yes, sir!”  Jess saluted in Navy-fashion, and then turned about and walked out the door.
Captain Argent saluted and watched her walk off.  His face contorted into a fragile smile and then fell away.  “That girl has more guts than any marine I have ever seen.”  He commented to himself under his breath.  “Good luck, kid”

Entering the main command area of the citadel, Walter could see massive columns of sanded stone sculptures.  The pillars looked like serpents entwined around massive arms with fists raised to hold the ceiling in place.  At the back wall, there was a large command chair with plush upholstery and a leather backing.  On either side of the command chair sat huge displays of global and orbital readouts.  Two smaller orcs operated these systems, and continued talking quietly into their headsets, obviously giving orders and carrying out the business of the fortress city.  The person, sitting in the command chair was ominous, in size and aura of command.  The orc leader looked like he could literally eat Walter in one bite, if that was their way, which Walter hoped it was not.
The leader turned to him, and his manner seemed too calm.  His hands were folded in his lap, and his face was solemn with a thoughtful look in his eyes.  “You are the one they brought from the cruiser?”
“Um, yes…look I don’t know what….”
“Silence!”  It was a command, not shouted, but in a normal tone that conveyed more authority than Walter had ever heard.  Walter quickly closed his mouth.  “You are to be our guest for a while, child.  We have need of a bargaining chip.  Hopefully, your people will listen.”
He nodded to the four guards surrounding Walter. “Take him to the guest chambers near my office and post a guard.”  The guards stamped their right foot down in unison, and maneuvered Walter toward an elevator in the wall to his right.  He did not like his prospects, since he knew his people well, especially the council and its military leaders.

Keep Reading
(Click to "turn the page" to Chapter 7)