The fifth chapter of the Mr.'s NaNoWriMo challenge is now ready for your enjoyment.  Due to the fact that NaNoWriMo ended, the project demanded a name.  Behold Mission Born: Space Twins.  If this is your first introduction to the Space Twins you might wish to start at the beginning.  Links to all previous chapters magically appear here:

But you, you're ready to pick up where you left off?  Scroll on down!  We're happy to have you, and as always, welcome any feedback.  Enjoy! 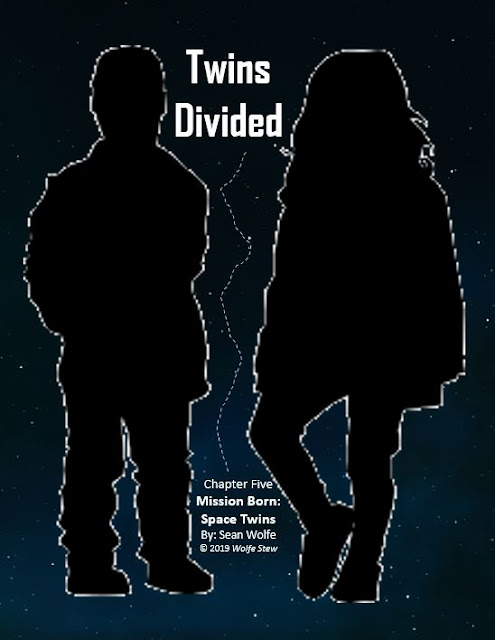 Walter woke up, realizing he had passed out from the prolonged use of faster-than-translight travel.  The Orcs were sitting in ragtag crew chairs, which had been bolted into the floors.  They sat there looking very somber.  Jenkins saw that Walter had awoken.  “Child, you will come with us.  You will learn what your people have done, and when they come, you will either fight with us or stand on our outer walls as protection!”  He turned away from Walter and looked over a console that had a readout of ships, warships, on its screen.  The same warships, that had fired on them, had been on that screen.  Seeing as he was secured, and they were far from his own known territory, he decided to sleep.  If he could regain some strength, it might give him his chance to escape.

Jess sat at the Captain’s Table and ate her dinner solemnly.  The Admiral was very pleased with her performance during the boarding of the Heavy Cruiser.  She was not really interested in ceremony and acclaim.  Her brother was on another ship, in another system most likely.  She could only hope that the Admiral’s fleet was here to find the orcs and the traitors that helped them accomplish the boarding action.
“So, Lieutenant Weathers, it seems your surname serves you well, for you certainly weathered the situation! Har Harr!”  Admiral Valentin guffawed over his plate, accidentally spitting some of it back onto the plate and around it.
Jess grimaced and carefully stated, “Yes…It does, huh?  So, this was a setup all along eh?  We were the bait and such?”
“Oh yes, YES!  Such a lovely plan. My lovely plan!  The council loved the idea from the moment it was uttered!  You know, this will get us all commendations.  We will go back home Heroes!”  Smiling broadly, he sipped his drink, slurping sounds coming from behind the tipped cup.
“I have a question Admiral…  When do we go after these scallywags?  I want a piece o’ them.  They took my brother!”  Her rage started to seep into her voice.
“Ah, yes!  We WILL go after them.  Your cruiser just needs a bit of care, and then we can be off!  This will be a fine chase!  A fleet of ships chasing down the traitorous scum of the universe!  Heroes, I tell you!”
As the evening wore on, the Admiral retired to the guest quarters, usually held for guests of State.  Captain Argent looked worn out, as he had to endure all of the Admiral’s boisterousness, while his crew was overseeing the repairs.  He would have overseen them himself, if the Admiral had not insisted on a ‘fine dinner’ to celebrate their ‘victory’.  Jess kept pacing the corridors of the ship, wandering from the command deck to the landing bay.  She realized, after several hours, that this was an unproductive use of time, since nothing was being repaired any faster than it would have been, normally.  Jess decided to get some sleep, so she would be fresh for their pursuit of the criminals that had taken her brother.


Keep Reading
(Click to "turn the page" to Chapter 6)

(Updated 6/10/22) You're here because you're looking for activities for your learners; we're here because we want to help. We've been stewing on ideas for every day of this next July week and hope you find one (or two) engaging for you (and your learner). Look at all the different ways we're serving them:   July Calendar  – Ideas at a glance with clickable links for you advanced planners. Weekly Blog - You’re reading it now.  😊   SUBSCRIBE  by submitting your email in the field to the left and get them delivered directly to your inbox. Check out our four recent posts (ideas never expire): June 28 - July 4 June 21 - June 27 June 14 – June 20 June 7 – June 13 Even More Ideas – Look over our  Pinterest  board. Check out this week's line-up (click the link to "hop" to the mentioned day's description): Apple Turnover Day - Three recipes from which to choose. International Kissing Day - Research skills, reading, writing, chronological order, and histo
Read more