When last we left them, Jess and Walter discovered the gnomes' reason for allowing them onto their base.  As the story continues, the twins struggle to make a decision that will impact not only their future, but also the future of myriad human races they only recently learned existed.

If you need to catch up or would like to refresh your memory, find all previous chapters of Mission Born: Space Twins below.

If you're ready to continue, then we're ready for you.  Carry on, dear friends. 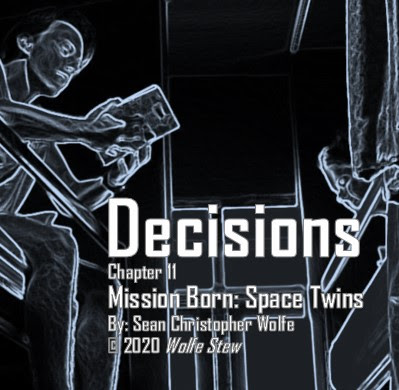 Sitting in their quarters and looking out the window onto the spaceport, Jess sighed.  “I don’ know if I can do this brother.  I ain’t exactly the best at actin’ like someone else.  Heck, I don’t see you doin’ it either.”  She shrugged her shoulders and looked back over at Wally.

Her brother sighed deeply and steepled his fingers.  “We are fugitives…. But we are also free now.  My decision will be to help the cultures being decimated by the Council.  Those Orcs treated us fine, even after I killed two of them.  They were honorable Jess.  The Council is not.”  Tears crept into the corners of his eyes.  “We have been fighting for a corrupt government bent on genocide!”  Anger replaced the tragic look, and he seemed a lot different than Jess ever remembered.

Walter smirked, “Nah, Sis, I don’t think many people got to know us.  I think we are safe with our speaking.  We may want to take El up on changing our faces though.”

Months later Jess and Walter looked much different than before.  Where Walter had been pale and with a gaunt-looking face, he now had a ruddy tone to his skin and his face was much broader.  Jess had a hawkish nose now, which had been button-like, and her eyes seemed hidden below slender, graceful eyebrows.  Walter now looked like one of the knights of old, gallant and honorable.  Jess now looked like a Valkyrie, one of the female warriors of Norse ancestry.  The looks gave them the image of dangerous traders, freelance merchants on the frontier of space.  Jess had decided that her speech did matter, so she started to clean up the slang, and sound more like her brother.  In turn, Walter had decided that his own speech could, and would, need to be more casual.  So, he adopted some of Jess’ colloquialisms and she adopted some of his formality.  Both now wore holographic hairline shaders and could change their hair color at whim.  Jess wore aqua-blue, with streaks of green, whilst Walter wore red with edges of violet.  This completed the look of their trading business and would allow them to apparently blend in with the trading community around the space docks they would end up frequenting.   With all of this having been done, they were ready for their first mission.  Whatever that might be.

As they arrived at the meeting room, they noticed an older-looking human sitting with El-4.  The man had ebony black hair, with a streak of pure white through it.  His eyes were a deep green, and the irises had a band of gold and green around the outer edge.  When he turned his gaze on them, they both stopped in midstride, for his face was that of Captain Argent.

“You can pick your jaws up off the ground now kids, I’m not who you think.  You’ve met my brother, obviously.  My name is Winterlocke, I’ll be your trainer and handler.  El, you want to tell them their mission, or should I?”  El-4 turned to Winterlocke and nodded solemnly.  Winterlocke turned to Jess and Walter with a smirk and a wink.  “Okay, so…. You two look like traders, but I’m going to have to teach you about the culture of the frontier traders.  First, you’re going to need better clothes, yours are shabby.  A trader will spend their full profit on good clothes and flashy weapons.  I’ll take you to our quartermaster later, and we’ll get that all figured out.  For now, rest….  We have a busy day tomorrow.”

“Woah, woah, woah!!” Jess interrupted, waving her hands in the air. “Slow down!  Who are you mister!?!  Why would you, Argent’s brother, be hanging at the Gnome’s place while he’s tryin’ ta kill everybody?!?”

Walter just looked on quietly, a stunned look on his face.

“Well, missy, I do happen to be his brother. And he is not running around killing everyone; he is disobeying orders within the bounds of what he can get away with.  IF they find him out…. And it better be a big if, ‘cause he owes me… then they WILL kill him…. Does that answer your question??”

Jess slumped down into the meeting room chair. “Yep…. Sorry, it’s just, well, he was the only one who really got to know us….  I liked him, and now he’s gone….”  Jess started sobbing into her hands.

“Hey now, kid.  It’s all gonna be alright.  Argent knows what he’s doing, and he has a plan if they start catching on.  He’ll get out…. I promise.”  Winterlocke looked at her with a worried look.  He got up, crossed the room, and put a weathered hand on her shoulder.  “Maybe you two should take a rest day tomorrow.  Go to the relaxation pool, and just blow off some steam.  I don’t think we realized how much you two have really been through.”

Walter nodded, “Come’on Jess, let’s go get some sleep tonight and relax tomorrow.  I hear they have a jacuzzi, it’s an old-world word for ‘tub of hot water’.  Pretty cool sounding….”

Jess got up and leaned into her brother as they exited the meeting room.

El-4 turned to Winterlocke, “You know, they have a point Winter.  Your brother is coming closer and closer to being discovered….  It might be time to send a message for him to get out.”

Winterlocke sighed heavily, slumped his shoulders, and stayed facing away from her.  “Go ahead, then…. Like I said… He owes me.  It’s about time he made good on it.”  Winterlocke walked over to the door and hit the button.  He was through the door before El-4 could even think to respond.


Keep Reading
(Click to "turn the page" to Chapter 11)