When last we left the twins, Jess and Walter were taking a much needed relaxation day before they begin their training - where this chapter picks up.  If you're not at this point in the story yet, the links below will help you catch up.

You're caught up and ready to go?  Read on, dear friends! 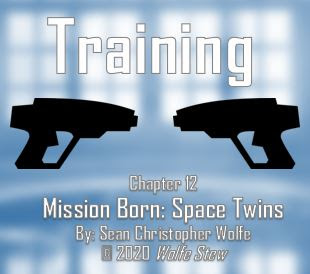 The twins were sitting in the mission room, once more.  After their day of rest, they had been outfitted by the quartermaster.  Jess had a large laser cannon resting on her back.  The thing had flames etched into the sides.  Walter had two delicate-looking pistols, made of a blue-steel, they shimmered coolly under the industrial lighting.  Their design lent a sense of graceful danger to Walter’s style.  Winterlocke sat across from them silently studying them.  El-4 stared at Winterlocke with a smile forming at the edges of her mouth.  She seemed to know something the twins did not.

Winterlocke stood up and walked over to Walter, snapping his fingers directly in his face.  Walter looked at him stunned.  “No, kid!  You can’t react like that!  The frontier is tough, tougher than it actually seems….  So…you need to react tougher than you seem.  Got it?”  Walter nodded and then put his right hand on one of his pistols and glared hard at the man.  “Yeah…”, Winterlocke smirked, “That’s it!”

Jess just stared at them, and finally let an exasperated sigh slip from her lips.  “You two done playin’ macho man??”  She flipped her cannon off her shoulder and carried the thing on her hip.  “I mean, you don’t gotta be macho, when you got a machine like this!”  She laughed hard at her own joke.

Winterlocke looked over at her and smiled, “She’ll fit in the way she is, I think.”  He winked at her, “You were born with the personality of a frontier trader Jess.  I really don’t understand how, but it’s remarkable.”

“Well..Coach, when you putting us in?”  Jess asked with a smug look.

Winterlocke raised an eyebrow as Walter cut in, “She’s been watching old sports vids.  I think she’s fallen in love with a game called dodgeball.”

“Okaayy….” Winterlocke just sighed, shook his head and nodded quickly.  “You got it.  Let’s get on your ship and go to a spacedock.”

“Wha- ?!? Uh, I was kidding Winter.  Seriously, I don’t think I’m ready for this….”  Jess let the cannon slip and then hung on to it like it was the only thing that could keep her up.

“C’mon kids, we’re going for a ride!”  Winterlocke almost whooped when he finished.  “THIS is gonna rock!”  He hit the top of the doorframe on his way out, walking toward the docking bay.

Walter shrugged and smirked, “Well, you HAD to challenge him…didn’t you?  I kinda like this Jess, now you get to tag along.”

“Yeah, well…alright, I’ll beat you there!”  Jess slung the cannon across her back in one deft movement and ran down the hallway toward Winterlocke’s departing form.

As they entered the docking bay for their ship, they could hear Winterlocke already kicking the engines on.  They could hear him yelling from inside the ship, it echoed down the landing ramp.  “You kids have really got to work on your cardio, I got away from you and stole your ship in a few seconds.  Now… let’s embark and go on a shopping spree.  It’s time you figured out how to bargain, and I am going to let you learn from a pro….”

“Oh…and I’ll bet the pro is you, eh?” Jess snickered as she sat back in the co-pilot’s seat.

“No, kid, somebody you haven’t met yet, and you just might want to be polite to this one.  She doesn’t like snotty little kids giving her guff.”

Winterlocke flipped a few switches and buckled in.  Sitting back into the pilot’s chair he released a comfortable sigh, “Ahh. Ya know, sometimes there just isn’t anything like flyin’…..  You kids need to buckle up, we’re taking off in 3…2…1…Blast Off!”  Winterlocke threw the throttle forward and they shot out into space.  Walter was lucky enough to have gotten into one of the passenger couches and buckled up.  The thrill of the liftoff was amazing.  The changes to the ship had enhanced its abilities tenfold.  Jess whooped, Winterlocke grinned, and Walter almost passed out.  Winter was dodging space rocks left and right.  The maneuvers made Walter grip hard onto the cloth cushion of the couch, while Jess was watching with intensity, grinning all the way.

As they exited the asteroid field that protected the Gnome base, Winterlocke started up a conversation with his two students.  “I know you two have been through a lot….  This is going to be dangerous…but it’ll be fun too.  In all of life there is nothing quite like the Frontier.  A person can change their life for the better or the worse, it’s all in how you approach it.  I’ll tell you now, I only take lives if I have no other choice….  That’s how I want you two to play it as well.  Life can be good.  Don’t make the mistakes you can’t take back, the ones that ruin you forever on the inside.”  He turned back to the viewscreen with a bitter look, and some wetness at the corners of his eyes.

“You got it Coach!”  Jess confirmed with an enthusiasm that was all, well…Jess.  She had not seen what Walter had seen.

The man had been through something, something tragic.  He wondered how this man had ended up on the edge of space, he didn’t seem the type to just hang out in an asteroid field.  Walter’s stream of thought was broken as Winterlocke shouted, “Alright kids, Spacedock 79 it is!  Get ready!  This may be a little rough!”  Winterlocke hit the button to their translight engines.

Only Walter heard his own words muttered, right before he passed out, “Here we go again.”

Keep Reading
(Click to "turn the page" to Chapter 13)