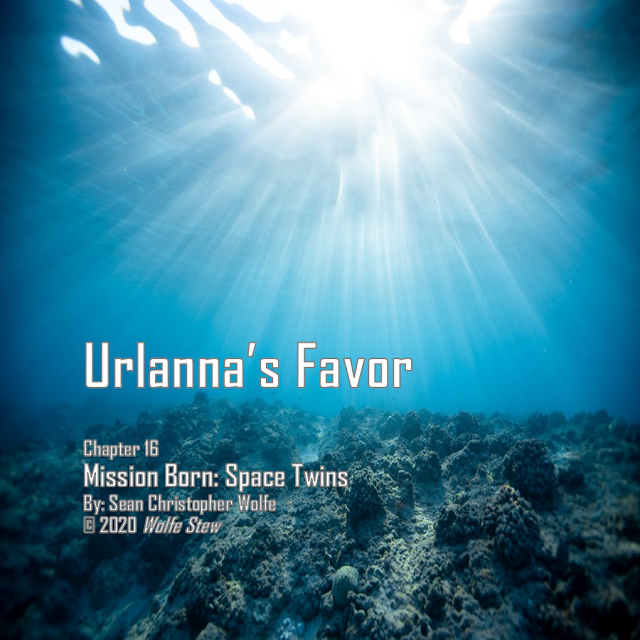 As they entered the huge pyramid of glass, the group of traders looked up in stunned disbelief.  It was hard to imagine the amount of stress the ocean was putting on the walls of this underwater palace.  Yet, it withstood the pressures around it, and its grace and beauty was magnified by the engineering feat that had led to its existence.  If these were tribal people, they were a highly sophisticated tribe.  Walter had seen other signs of sophisticated technology when one of the guards had brought his spear down a little too hard, an aura had sprung up around the spearhead.  These people were good at hiding what they really were, and it had probably saved their culture numerous times.  Underestimating your opponent was dangerous in any game, especially the game of life.

“Sooo, when do we meet the Queen?”  Jess piped in, breaking them out of their stunned silence.

“Jess, why do you always do that?!”  Walter was agitated.

“What?!  I was just askin’ a question. Oh, Brother o’ mine….  You like this place, eh?  Probably tryin’ ta figure out where their library is, eh?”  She nudged him in the ribs and smirked.

Walter just shook his head and brought his hand up to shove her gently away from him.  Then, he looked up sharply and asked, “You think they have a library??”

Jess chuckled and Walter could hear the rest of his companions laughing as well.  He turned a bright beet red and shrugged his shoulders, “What?”

“It’s okay kid, we’re all impressed by this palace under the sea.  I would bet they have amazing tales to tell….”  Winterlocke turned his gaze around the entire building and then landed his sight on the large throne occupying the distant, angled wall of glass.  A school of large golden fish were swimming behind that glass, and they made the throne even more magnanimous as it looked like golden ribbons were highlighting the massive seat.  As their gaze landed on the actual throne, which was made of some kind of metal with an aquamarine aura, they could see the Queen.  She wore somewhat simple clothes, a shirt that reflected the light with a dazzling pearlescent display, and a dress made of similar material, but it almost flowed along the ground like water.  She stood and walked over to the group.  Her soldiers did not react in the least, so this was ordinary conduct by the Queen.  Apparently, she did not equate royalty with being better or more than another person.  The leader of their guard announced her, “Her Highness, Urlana Thaal!”  He kneeled as did the rest of the guards.

“Rise Sentries!  I have no need for pomp at this moment!”  She turned to the group and smiled with a hard turn of her lips.  “You must be the group the Gnomes sent.  I know your plan to save the Captain, but I must ask a favor of you as well….”

“Whatever your Highness needs, we’ll do it.”  Jess blurted out before she really thought about what she was saying.

The Queen smirked and looked to Winterlocke.  “Will you help me?”

Winter looked her in the eye, “Yes, but only if we can get my brother out first.  What is it you need?”

“I want you to use our shield technology to save this city from the Council.”  She spread her arms out behind her, to acknowledge a city they had not seen before.  It was a massive glowing metropolis residing in a valley.  The palace resided on a cliff and had a fantastic view of the city.

“I think we can do that, but I’m not sure why you would need us….”  Winterlocke gripped his chin in one hand, feeling the stubble of his unshaven face.

“I need you to project it from your ship.”  She let that set in.

“So, we will be in harm’s way of the barrage of several ships?  I can’t ask everyone to do that, but I’ll do it myself….”  He remarked solemnly.

“You can’t.  I won’t let you!  You aren’t going to decide this for me.  It’s our choice!”  He was almost screaming at Winterlocke.

“Kid….  I was just sayin’…”  Winter tried to finish his sentence but had to contend with Kat now.

“I don’t think so, Old Man!  The kid is right!  You don’t have the right to kick us off the mission.  So, we’ll be coming with… and you’ll just have to be happy about it.”  She slapped him in the back of the head this time.  You could tell Kat was irritated with him.

Winterlocke smiled briefly and rubbed the back of his neck with his right hand.  “Okay, okay. I got it; we’re doing this together, apparently.”  He turned to the Queen and saw a look of admiration in the Queen’s eyes as she looked at each of them individually.

“Your group is far more than I expected.  My people and I will owe you greatly for this.  Ask for anything you need from my quartermaster, and he will supply it.  Commander, put them in the suite we use for diplomatic ambassadors.  Meet their every need.  They are soon to be the saviors of this planet.”  She turned and strode out of the throne room.

The leader of the soldiers led them to another section of the palace that was enclosed and lit in peaceful tones. The deep blue hues gave the illusion of waves on the walls and ceiling.   The furniture in this room was luxurious and had curves to accentuate the idea of the sea.  Walter was the first to plop himself down on one of the plush azure couches.  “So, is now a good time to say I plan on finding a way to survive this, and bring you out of the fire with me?  Because, I will.”  He put his arms behind his head and laid back.

The rest of them took up positions on the different furniture.  Winterlocke took a huge armchair, resting his head back on the pillow that was sewn into the chair.  “Kid, I’ll take that promise to heart, because it’s been a long time since I have felt this good.  If I ever had a family outside of the Templars, this is definitely it.  I don’t want to lose any of you….”

Jess turned to them and quietly enunciated her next statement.  “We need to know how the shield works, and what we can do to ensure our own survival as well.  We need to get to work on this now.  We NEED to not be sitting on our bottoms, waiting for the fleet to just appear.”  She got up and walked over to the door, opening it, she talked to the sentry quickly and then left with him somewhere.

“Well, I guess that’s the sign.  Winter and Kat, I take my leave of you as well.  I’ll be in whatever database they have here that I can delve into.”  As Walter left the room in the same way as his sister, Kat and Winterlocke turned to each other and just laughed.  “You know, those two remind me of us, a long time ago.”  Kat smiled warmly and looked up at Winterlocke.  “You know we have a very slim chance of winning this one, Kat.  I don’t know if we can pull it off….  I mean, even if they have an amazing shield technology, how can it prevent us from dying to the explosions of such a barrage of missiles?  I have never heard of this kind of tech, have you?”  Winterlocke looked tired.  He looked older than she ever remembered.  “Maybe we just need to look into it first, before we feel all glum about our possible deaths.  What do you think Old Man?”  She slapped him hard on the back and started toward the door.  Winterlocke got up and walked solemnly out of the room with her.  He smiled then.  Hope was the only thing they really had beyond their little family.  And Hope made everything better.

Keep Reading
(Click to "turn the page" to Chapter 17)
Looking for a place to kick back and relax while you read?  Then you want to stop by our Reading Nook where you'll find original Wolfe Stew literary works.