Talk about suspense. Last chapter left off on a cliffhanger, and we're betting you clicked as quickly as you could to this one. Well, if you're all caught up and ready to go, blast off below. Otherwise, click the chapter of your requirement below: 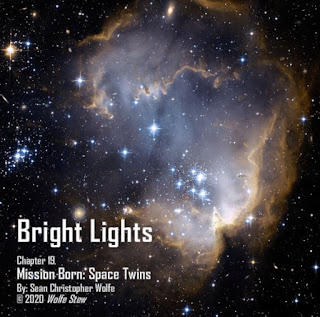 Kat and the twins looked down into Argent’s tear-streaked face, and a smile slowly appeared.  “He’s alive!”

A grumble came from under Argent’s body, “Could you please get off of me?”  Winterlocke sounded exhausted, and his brother quickly moved out of his way.  As he maneuvered his body to a sitting position, which seemed to take forever, the twins moved forward.  Their eyes were tear-streaked and showed the love of a family for their father.

Winterlocke smirked and motioned them to come in for a hug.  With a twin on either arm, Winter’s own eyes started to tear up.  It looked as if he hadn’t slept for a year.  His hair had grayed on top and his hair on the sides was even brighter white than it had been.  His eyes were dark underneath.  He had aged a decade in less than an hour.  There was water everywhere inside the ship.  It soaked the floor and made it even more difficult for Winterlocke to stand.  All of them helped the big guy into a standing position.

“So…. What do we do now?  You know they can send another bombardment within an hour.”  Kat was perplexed, she did not see how they were going to stop another bombardment.  “There’s no way I’m getting this ship back up there, and we don’t have another shield.”  She just shrugged and started up to the top hatch of the ship.  “Might as well watch what happens next. We got no other choice it would seem.”

Winter grinned half-heartedly, “I am not sure Kat, but at least we are all together.”

“True, and I guess we can all die together as well.”  She winked at him with a bit of a sarcastic smile.

When they got on the top of the ship, they spread out on the wing and watched the lights above them as they dissipated from the mess of explosions which shattered the shield.  What they saw before them was confusing.  The ships of the fleet glittered in the sky, but something else was lit by the sun of this world.  There were several spherical ships just to the right of the fleet.  Large orange beams seemed to flash and connect from each sphere to each ship in the fleet.  Small pinpricks of light popped on the hulls of the fleet ships.  “What is that??” Jess whispered.

Winterlocke let out a whoop.  “Yes!  The Gnomes did it!”

Argent smiled and then looked at his brother, “That wouldn’t happen to be the Elves, would it?”

“Exactly, Brother, I never thought they would come.  They have been in a brutal battle with the Templar Legion as of late.  It is amazing that they could send that many ships to help us!  We are SAVED!”  Winter let out a howl, his happiness exuded from him.  The twins and Kat all smiled, they understood that they were safe, just not how.

Just then, a large submersible shot out of the water and bobbed onto the surface.  A few moments later, they could see the Mermen Commander step onto the outer hull and make his way onto their ship’s hull.  “Good afternoon!  It seems you were successful on all fronts!  Her Highness would like to congratulate you in person.  If you would all follow me, we can make arrangements for your ship to be repaired and hauled into a safe area.”  He smiled and gestured for them to board the large submersible, they could barely look at it, as the sun shone off it brightly.  The pearlescent hull glowed in the sunlight, and they could feel the heat of the sun bear down on them, even as the cool winds of the sea caressed their faces.  It was a good day.

On their way to the underwater kingdom, they began to converse about everything that had happened.  They were all intensely focused on Winterlocke when he started to explain his ice powers.  “You see, I was a Templar.  We were given powers through a process of awakening.  We just walked through a room and you either became a Templar or you didn’t.  There were only about half of us that made it into the Templar Legion.  The rest, well, that’s another story….”

Winter got quiet and they waited for him to continue the story.  He looked up suddenly, after looking very serious and saddened in a way.  He smiled and started again. “We were taught how to control our abilities through chants and meditations.  I can only activate my power through the scripture I said aloud.”

“So, wait, do you believe in what you said, or is it just a saying to you?  The Council has us read scripture and there are many churches on Earth.  But Science is also studied, and from what I know the scriptures were taken away at one time.”  Walter stated the facts clearly and precisely, trying to understand.

“Yes, kid, I do believe in God.  I don’t believe that the Council is what God intended, and there are many of us that fight for all beings.  The Council has corrupted the beliefs through fanaticism and fear.” Winterlocke looked at Walter and patted him on the back.  “One day we will free all beings in this intergalactic community.  The Council is strong, but it isn’t invulnerable.”

Kat stood up and remarked loudly, “We’re coming into the base, get ready to get off this contraption.”

The Mermen soldiers looked at her and she realized she had just disrespected their vessel.

“Uh, sorry guys, I don’t like being underwater much…”  She smirked uncomfortably.

Winterlocke and Argent both put their hands to their mouths, holding back a guffaw.

Jess smiled proudly at Kat, as Walter put his head in his hands and waited to disembark.

These were interesting times indeed.

(Updated 6/10/22) You're here because you're looking for activities for your learners; we're here because we want to help. We've been stewing on ideas for every day of this next July week and hope you find one (or two) engaging for you (and your learner). Look at all the different ways we're serving them:   July Calendar  – Ideas at a glance with clickable links for you advanced planners. Weekly Blog - You’re reading it now.  😊   SUBSCRIBE  by submitting your email in the field to the left and get them delivered directly to your inbox. Check out our four recent posts (ideas never expire): June 28 - July 4 June 21 - June 27 June 14 – June 20 June 7 – June 13 Even More Ideas – Look over our  Pinterest  board. Check out this week's line-up (click the link to "hop" to the mentioned day's description): Apple Turnover Day - Three recipes from which to choose. International Kissing Day - Research skills, reading, writing, chronological order, and histo
Read more