It is here! We're excited to announce the closing chapter of Mission Born: Space Twins is ready for your reading pleasure.

If you need a refresher, or are new to the story, find all previous chapters here: 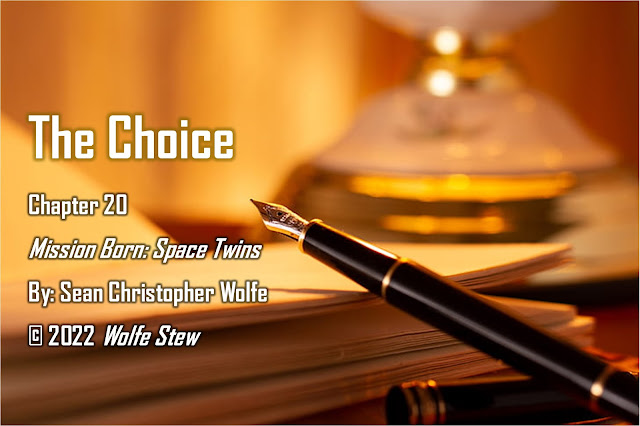 As they entered the underwater castle, Jess could see a giant screen above the queen’s throne.  On the display was a very thin man with sharp, pointed ears.  His face seemed to gleam with a golden glow.  “Yes, we have disabled all ships and captured all of the human crews.  We will send the lower ranking officers and their crew back to the Council.  The officers who enacted the acts of genocide shall be held for hostage trades and if they do not wish to make deals… then their fate is sealed.”  The man grimaced and continued talking.  “I leave you now, your Highness.  My king shall always defend those of the Nations against the tyranny of the Council.” He bowed and the screen faded to black.

Urlanna turned to the returning heroes. “AH!  My friends!  You have done a great service for my people!  I wish to reward you…and ask another favor.  One, which you might look forward to.  One, which is supported by all of the Nations.  But first, we give you enough credits to live happily on for a very long time.”  She handed a cred-card to Winterlocke, who looked at the card and gasped.  The twins and Kat all looked over at him, and he winked happily at them.  Queen Urlanna then gestured to them all, “Now, the favor…. The Nations wanted to make sure that if you took this favor to heart, it would be completely on your own terms.  Thus, you have the ability to turn us down, and move on with your lives.”  She nodded toward the card in Winterlocke’s hand.

“Well, the suspense is killin’ me, so get on with it!” Kat realized what she had said as her mouth closed.  Wide-eyed, she apologized meekly, “Um, uh, sorry….”

The queen smirked at her and continued. “We would like you to create a special force to protect the Nations.  The threat that the Council poses to our combined people is severe, and much more than we can handle by ourselves…. This force would be under your control, based where you wish it, and it would take on missions designed by your team.”  She paused and waited for a reply.

An uncomfortable silence hit the room.  The twins shifted nervously.  Kat gaped at Urlanna, seemingly unsure of how to react.

“We need to talk about this between ourselves, Highness.  May we have a place to relax and talk about your offer?”  Winter bowed.

Urlanna nodded and called to one of the guardsmen. “Take our friends to the upper floor’s library.  Get them anything they wish.”

The guard bowed deeply and straightened quickly. “As you wish, Highness.”

She turned back to the group. “You have as much time as you wish to think over this offer.  We are in your debt… and if you accept the offer… even more so.”  She smiled and allowed them to depart with the guard.

As they entered the library, they could all hear Walter’s contented sigh as he pulled a book off of a shelf and opened it.  He sat on a large, ornate chair.  The entire room was lit by a warm amber glow, and it was kept at a decent temperature.  There were shelves of books on every wall.  Seating was abundant, and in light hues of whites and golds, it wrapped the room in comfort.  The others sat down on a couple of couches and sighed.

Winterlocke started, “What do we want to do?  They obviously need us, but I am done following an authority that could turn out to be harmful…. I have done that before….”

Walter looked up from his book, “They said we would have complete control…. So, what should it look like?  Us in charge, that is.”

It was Jess’ turn to pipe in, she stood up and breathed deeply. “I think we need to make a group that can go places and help people, like we have been doing.  We have the gumption to get things done, and that’s what it’s gonna take!”

Kat shrugged, “She’s got a point.”

“So… we start with us.  We train others like us.  And it grows from there.” Winterlocke stated.

“Sounds good, kid.” Kat nodded, and looked at Winterlocke. “Well? What do you think old man? We give it a try?”

Winterlocke smiled, “I think… we have a lot ahead of us. But, it’s a great start.”  Then he grabbed them together in his arms and gave them a huge hug.  They all hugged back.

Suddenly, they felt a nudge against that embrace.  Argent had joined them, “I can’t wait to be a part of this.  You inspire me.  All of you.”  And the warmth of that moment grew.  A new family had grown into the place of a lonely sibling bond.

(The adventure is just beginning!  Watch for more Mission Born books to follow!)